The Road to Wigan Pier

What has Wigan done to deserve being pilloried as the epitome of the Northern industrialised wasteland? Well, George Orwell’s vicious 1937 diatribe The Road To Wigan Pier didn’t help. Inside this brutal polemic, Orwell tore into the terrifying world of the disgusting, decrepit, dilapidated common lodging house with its unspeakable food and horrific lack of basic hygiene.

“Often the beds were still unmade at six in the evening, and at any hour of the day you were liable to meet Mr. Brooker on the stairs, carrying a full chamber-pot which he gripped with his thumb well over the rim.”

Wigan’s “pier”, 20 miles from the sea, was a coal tippler on the Leeds-Liverpool canal which had already been demolished and had long been the subject of music hall jokes thanks to George Formby Snr.

In the years since Orwell’s visit the town’s leaders have never been sure whether to praise Orwell for bringing publicity and custom to the town – countless numbers have visited, spurred on by his book at the expense of an unrecognised neighbour such as St Helens for instance – or to bury him for giving the place such a bad reputation.

In the 1970s Wigan attained a different kind of status as the home of Northern Soul: obscure American dance records spun in Northern England clubs, particularly Wigan Casino. In 1974 Wigan was stuffed into the new authority, Greater Manchester, which made absolutely no sense geographically and still doesn’t.

In more recent years Wigan FC have been a most unexpected player in the world’s football richest league and shock FA Cup Winners 2012 but stuffed with mercenaries who soon fled when relegation beckoned. The shocking contrast to a local institution populated by people with no connection to the town earning absurd obscene sums is the notion that poverty here in the early 21st century is worse than it was in the 1930s when at least people had meaningful jobs.

On the walk we will go in search of that elusive pier, the spirit of northern soul and walk the streets that upset Orwell. As the great man might have said: “All walks are equal but some are more equal than others.” 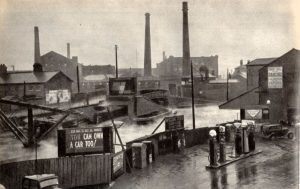