The second world war began in September 1939 but for months nothing much happened. It became known as the Phoney War.

After the surrender of France on 20 June 1940 the first Manchester air-raid sirens were heard and there were minor German raids on Lancashire, and on 29 July 1940 the first bomb fell locally. It dropped on a hut in Salford at the corner of Trafford Road and Ordsall Lane. Two weeks later, on 8 August 1940 an aircraft rained on Salford not bombs but Nazi propaganda leaflets, “A last appeal to reason,” a translation of a Hitler speech. One bundle hit a policeman at Castle Irwell.

It was not until 22 December 1940 that the first serious attacks on Manchester began. This was the Christmas Blitz of Sunday 22 December to Tuesday 24 December 1940. On the first night 270 aircraft released 272 tons of high explosive and 1,032 incendiary bombs. On the next night 171 aircraft dropped another 195 tons of high explosive and 893 incendiaries on central Manchester and Salford. More than 650 people were killed; more than 2,300 injured.

Many major buildings were wrecked or destroyed: the Free Trade Hall, Cross Street Chapel, the Corn Exchange and Smithfield Market. Within days the mediaeval pubs of the Shambles, apart from the still surviving Wellington Inn and Sinclair’s had been wiped out. Only one English cathedral – Coventry – took more bombardment than Manchester’s.

But as you probably know, the first casualty in war is the truth, which is why we will unveil Manchester’s war time secrets: the dirty tricks, the black propaganda, subversion, subterfuge and disinformation. How some unpatriotic locals went to absurd lengths to avoid conscription; how American GIs took over the city and nearly caused a riot; how the authorities built a mock-up version of Manchester in the moors at Burnley out of plywood and oil drums which were lit at night to make it look as if “Manchester” had already been bombed! 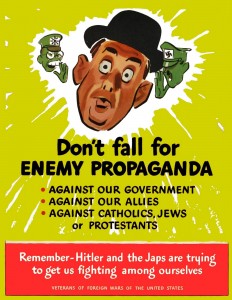