News from recent tours: Please join us next time… 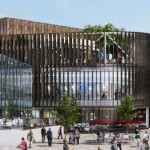 The big opening of HOME, the city’s exciting new cultural centre, home now to Cornerhouse and the Library Theatre, saw us launch our new Manchester music tour on Saturday 23 May. We had around 30 people, thanks to the HOME promotion team, and so Ed Glinert and John Alker split the group in two to lead a tour around the great Manchester music locations such as the Hacienda, Ritz and Free Trade Hall as well as some of the more unusual ones: Tony Wilson’s house on Little Peter Street and “the hole in my neighbourhood down which of late I cannot help but fall”, as Elbow sang (next tour, Sat 27 June).

Meanwhile, as the music tour raged, Steve Bourne was taking a sold out crowd of 48 customers on three Clock Tower tours at Manchester Town Hall. There’s always a buzz about exploring somewhere you can’t easily get into. The added extra with the Clock Tower tour is that it’s not just a climb up the spiral steps to see the Heath Robinsonesque machinery, stand behind the  giant clock faces and pop out onto the parapet, there’s the chance to push Manchester’s key role in the very idea of setting standard time through Britain in the 19th century and the debt we owe the French (next tours, Sat 20 June). We also had a good crowd of 16 on the regular Town Hall tour (next tours: Tuesdays and Saturday mornings).

A dozen hardy folk donned walking boots to follow Ed Glinert around Lyme Park & Disley, a very new New Manchester Walk, on Sunday 24 May. The route was simple and spectacular. Up the steep steps in the wood above Disley station, along the exquisite Red Lane, with its million pound-plus mansions, and then into the massive Lyme Park, enclosed as a gift to a local warrior by Edward III, the king who brought Flemish cloth workers into Manchester in the 1360s to aid the local textile industry. We made it past the ferocious deer to Lyme Hall, setting for that ingenious piece of television during the Red Dwarf episode “Timeslides” (the giant Craig Charles statue has gone) and that dazzling folly, The Cage (pictured), which wonderfully, for once, was open. 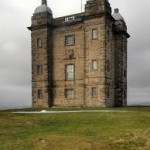 A nifty east turn took us through the Lyme forest to the road to Kettleshulme, a quick peak at the cottage where that great historian A. J. P. Taylor* entertained Dylan Thomas in the 1930s, and then down the hill into the Ram’s Head, a major stop on the 18th century stagecoach route from Manchester to London. After three hours we had completed the square back to the station.
Tiring but thrilling! We’ll have to do that one again. Don’t know when yet.

* It was A J P Taylor, a lecturer at Manchester University, who once described Manchester’s only surviving Roman ruin (sadly inaccessible off Collier Street in Castlefield) as “the least interesting Roman remains in Britain”. At least you could get to it in his day.