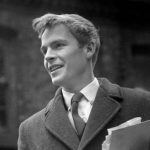 If Manchester city council didn’t exist Manchester would still be run by the mediaeval lords of the manor, and the lord of the manor of Manchester would be Max Mosley. What fun that would be: sex orgies, motor racing, but at least no racist leaflets. Well, not any more. But back in 1961, in a by-election in Moss Side, Mosley published a leaflet from 113 Upper Lloyd Street in the heart of the constituency, for the local Union Movement candidate, Walter Hesketh.
The Union Movement was the party his father Oswald Mosley formed after the Second World War to replace the British Union of Fascists (BUF). When Oswald Mosley, sorry, that’s Sir Oswald Mosley, 6th Baronet Mosley of Ancoats (another local link), married Diana Mitford in 1936 it was at the home of Joseph Goebbels and Hitler was a guest. Mosley’s BUF had targeted Jews up to the end of the Second World War. The new Union Movement replaced Jews with black West Indians and Asians. The 1961 leaflet was fiercely racist. No holding back, no pussy-footing, purposely put out in an area that was becoming popular with West Indian immigrants. It warned: 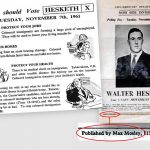 “Protect Your Health. There is no medical check on immigration. Tuberculosis, VD, and other terrible diseases like leprosy are on the increase. Coloured immigration threatens your children’s health.”

We can thank the Working Class Library in Salford for finding the leaflet. How apt that is. John Stourton was the Hitler-worshipping Conservative MP for South Salford from 1931-45 (as featured on our Seditious Salford tour during the forthcoming Histories Festival). In 1939 he joined the sinister Right Club, a secret society of out-and-out Nazi supporters whose main aim was to “oppose and expose the activities of Organized Jewry”. Other members included William Joyce, executed at the end of the War as Lord Haw-Haw (he features on our Midland Hotel tour. Nice). Their logo was that of an eagle devouring a viper, the viper symbolising “the communist and Jewish element in British society”. This was made into a silver badge and given to every member in a red leather case.
When war broke out their fanaticism increased. Right Club members sneaked around at dead of night during the blackout placing stickers on anything that didn’t move; things like “This is a Jews’ war”. The Union Movement lost the 1961 by-election. Max Mosley was arrested after swinging a punch at a “Jew-baiting” fascist rally in Dalston, north-east London. He denounced his father’s views two years later. Just as well. He now says he cannot recall the leaflet.