People of Manchester! People of Britain! People of the World! It’s the long-awaited (after six years) return of Underground Manchester in …

Please book on eventbrite, going straight to the site or clicking on relevant link on our website.

We will descend beneath the city streets on a scintillating subterranean sensationalist and serious new tour.

* First, a warning. Manchester could be under attack from an awful airborne enemy. Various city centre buildings have been targeted. We will reveal the hit list.

* A well-known building in the city centre has been chosen as the secret government emergency HQ, should the enemy invade Manchester. Only we know its identity.

* We will take refuge from the Blitz in the subterranean shelters. Secure? We hope so.

* Good news! A different invading army is arriving in Manchester. They are friendly. They will bring with them luxuries we haven’t seen here for years: oranges, chocolate, tipped cigarettes, silk stockings…yes, where would we be without silk stockings?

* If we win the war we can all dance for joy in Albert Square.

* With that war over, there will now be a new, bigger threat. Don’t want to alarm anybody but can we take refuge from imminent nuclear annihilation.

* Now you can go home into the safety of 21st century Manchester.

Our earlier Underground Manchester tour, remember, was England’s second most popular a few years ago. Only the London Jack the Ripper tour brought in more customers.

Until then, beware of 5th columnists.

For dates, please go to eventbrite and book there. 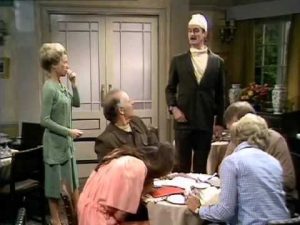