We remember the legend that is/was Mark E. Smith 3 years on 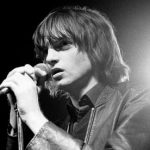