Next walk: no dates yet. 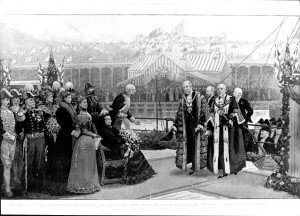 Queen Elizabeth II may well have opened Metrolink in 1992 but it wasn’t always so easy to get a royal to go to Manchester. The town simply wasn’t important enough for such luminaries as William the Conqueror, Richard the Lionheart or Elizabeth I to stage a royal visit.

Sure Bonnie Prince Charlie put in an appearance in 1745, rustling up support for his bid to see the Stuarts back on the throne, but he wasn’t the king and never would be even though he thought differently. Not until Queen Victoria’s official visit to the area in 1851 did Manchester see a real life royal ruler.

The Guard of Honour of the Yeoman Cavalry accompanied Victoria and Albert to Cross Lane, the boundary between Pendleton and Salford, where according to the mid-20th century communist agitators the Frows: “The cavalry were dismissed for fear of disturbances, as Peterloo was still fresh in the minds of the people”.

But what about Manchester itself? Victoria returned much later, in 1894, for the opening of the Manchester Ship Canal. Seventeen years before, the Queen should have been here for the opening of Manchester Town Hall, yet she refused to attend. Find out the full story on our walks or at our talks .  Royal Manchester walk – and find out what embarrassment happened to George V, some 30 years later when he tried to open the library.