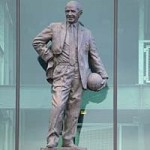 It may have been the calm air of authority he carried around with him or the fact that he got things done. People looked up to him and did according to his bidding. Matt Busby was born in 1909 in a mining village in southern Scotland, and as an aspiring young footballer was ignored by Celtic even though he was a Catholic because he had spoken to Rangers. Consequently young Matt journeyed south to play not for Manchester United but for the two teams that became their greatest rivals: Manchester City and Liverpool.

After the Second World War, Matt became manager of Manchester United where he helped build not one but three brilliant teams, refashioning the club after the horrors of Munich and making them the first English winners of the European Cup. He also nurtured the greatest of players: George Best, Bobby Charlton and Denis Law. What a trinity! And that’s apart from an almost as holy trinity of Nobby Stiles, Paddy Crerand and Tony Dunne alongside.

The “Manchester Heroes Matt Busby” tour takes you through the story of the game’s greatest manager visiting haunts he would have known: the Midland Hotel (where Bobby Charlton’s testimonial dinner was held in 1972), Manchester Town Hall (Busby was in the City team that won the Cup in 1934 and celebrated here) and probably even the Brown Bull on Salford’s Chapel Street, haunt of George Best, which Matt refused to name properly, purposely calling it the Green Pig, Black Cow or Brown Horse in admonishing his greatest player.