Next tour: No public dates yet.
Meet: to be decided. 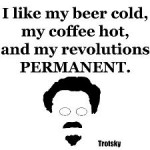 What ever happened to Leon Trotsky? Well he never came to Manchester, but Marx and Engels did, and so too did “Orator” Hunt, Richard Cobden and the Pankhursts. So let’s drink to the comrades, the communards, the carbonari and compadres.

As for Marx and Engels, they liked a drop. After all it was thirsty work for Engels, a successful cotton merchant by day and a fiery, rabid revolutionary at night traipsing the slum areas of Manchester gathering ideas on how to change the world.

When Marx came to Manchester they would head off for a pint of red roasted ale in the back streets of Manchester. We have no idea whether they ended up in the Ralph Abercrombie but we do know that the building was involved in the events of the most radically inspiring day in Manchester history, the Peterloo Massacre. Join us for a drink and you’ll find out how.