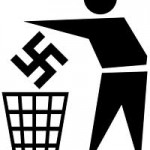 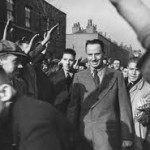 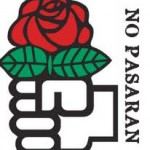 Despite its left-wing credentials, Manchester has some shady political connections. The most infamous figure in British fascist history was Oswald Mosley, 1930s leader of the British Union of Fascists. But he was also the 6th Baronet Mosley of Ancoats, no less, whose ancestors had been the lords of the manor of Manchester for hundreds of years.

Mosley often visited Manchester and would meet his deputy, William Joyce, who became the war-time traitor “Lord Haw-Haw”, usually at the Midland Hotel, a building the Nazis tried to avoid bombing during the second world war as they expected to capture the city and place their top brass therein as they turned Manchester into a fascist city.

The fascists’ ’30s HQ was in Northumberland Street, Broughton, now, wonderfully, a yeshiva – a Jewish school. But surely all that is in the long distant past and no fascist activity could happen here any more? Well, let’s not forget that the man pictured below, Nick Griffin, is an elected political representative in Manchester who won a local seat for the European Parliament in 2009 standing on a fascist platform. (He is pictured here in the Conference Hall at Manchester Town Hall post victory, standing some 20 ft above the Sculpture Hall cafe’s Spanish Civil War anti-fascism plaque).

“No Pasaran – they shall not pass” was the anti-fascist rallying cry in the 1930s and it’s still needed now. 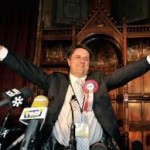