* At the moment we are featuring the Royal Exchange as part of a double tour with the John Rylands Library. We also feature the building on our cotton history tours. 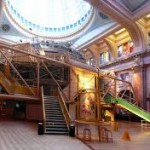 For more than 150 years cotton merchants came here to cement deals with like-minded businessmen: yarn agents, bleachers, spinners, dyers, shippers and of course mill owners. Business day was Tuesday and Friday lunchtime – “High ’Change” – when some 3,000 merchants would fill what was the largest trading room in the world. 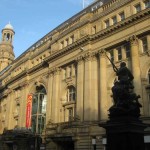 The building closed as a cotton exchange in 1968 and after years of uncertainty, which included plans to convert it into an underground railway station, opened for theatre on 15 September 1976 with Laurence Olivier as guest of honour.

Since then its programmes and performances have become legendary, featuring stars such as Tom Courtenay, Helen Mirren and Kate Winslet alongside up-and-coming starlets who could one day be as famous.

This is one of Manchester’s greatest buildings, with a history to match, that takes in Friedrich Engels, Queen Victoria and Vanessa Redgrave. We spend around half an hour here, often with a peek into the auditorium itself if there are no rehearsals taking place, and then off to the John Rylands Library, another formidable cotton palace, for a longer tour.