Next tour: NO DATES AS YET.
Meet: tbc.
Booking: Just turn up for this one! please check website a day before the tour just in case the guide has fallen into the crypt. 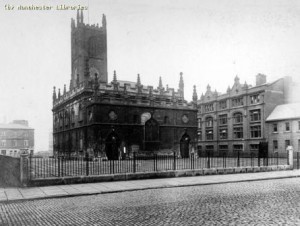 Okay, those weren’t the real full names, but that shows where the churches were. Built to cater for the rapidly expanding town, they were left looking increasingly forlorn, without worshippers, by the 20th century. Many were demolished in the 1930s, but the spaces remain; as car parks, gardens, open spaces.

This is one of the most extraordinary walks in the NMW canon, unearthing a buried city, a lost Georgian town, brutally destroyed by the industrial and commercial revolutions.

We head to nearby Chinatown looking for signs of St James’s. An office block stands on the site by St James’s Street. Nothing remains of the church. Thoughts of Shelley’s Ozymandias came to the group last time. One walker last time sighed for this lost Manchester when the guide showed her the picture.

We then search for other hidden gems. St Peter’s, where until recently there was a cross and a garden to mark the site; St Matthew’s Campfield (by Charles Barry, no less); St John’s (above, where pleasant gardens mark the site), St  Mary Parsonage (another glorious garden).

Some were never churches but just graveyards. Walker’s Croft under Victoria Station hides some awful stories. The weirdest spot is the car park off Queen Street, Greengate, where close inspection reveals a large number of tombstones. This was the Bible Christian Church dedicated to vegetarianism on religious grounds.

This is the Manchester and Salford that has all but gone; towns dedicated to mystics, misinterpretations of the Bible, mysterious secret spaces. 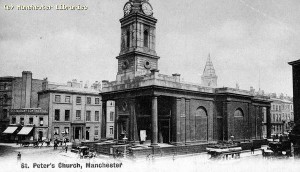