Next walking tour: Sunday 5 February, 11.30am.
Meet: Victoria Station wallmap.
Booking: If you’d like to go to Strangeways, the law will help you.
Alternatively, just follow the orders from the guv’nor below.
Oh, alright: Please press here to register with Eventbrite.
Bring: Bucket for slopping out.
End: Somewhere near the guv’nor’s office.

After that, the next walking tour: Saturday 11 February 2023.
Meet: Victoria Station wallmap, 11am.
Booking: If you’d like to go to Strangeways, the law will help you.
Alternatively, just follow the orders from the guv’nor below.
Oh, alright: Please press here to book with Evenbrite.
Bring: Bucket for slopping out.
End: Somewhere near the guv’nor’s office. 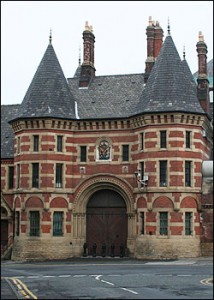 Strangeways. The very name enough to send a frisson of fear down the spine of the most hardened felons. 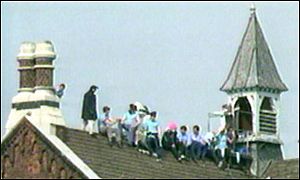 Later, Paul Taylor and Alan Lord faced a five-month trial as its ringleaders. Both were acquitted of murder. The riot resulted in the Woolfe Inquiry which ended the practice of slopping out and saw the jail rebuilt and euphemistically renamed as Her Majesty’s Prison, Manchester. But to everyone else it’s still good old Strangeways, or in Jim McDonald’s words: “The Big Hoise.”