Next public tour: No dates set yet.
Private tours: we took a group of choristers from the Home Counties on this walk –with great success – last March. To follow in their footsteps, please contact New Manchester Walks.

The Halle is Britain’s first and oldest professional symphony orchestra (and the fourth oldest in the world). It is also the only great orchestra that takes its name not from its city of origin – Manchester – but its founder: the German-born musician, Charles Hallé, a friend of Chopin. 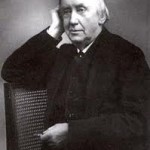 The orchestra was formed to provide the music for the 1857 Great Art Treasures Exhibition held at Old Trafford. Hallé was encouraged to keep the ensemble going when the exhibition ended and its first concert took place at the newly-built Free Trade Hall in January 1858.

After the founder died in 1895, the orchestra continued to prosper under a succession of enlightened appointments: Hans Richter, Thomas Beecham and most famously John Barbirolli. It is now based at the Bridgewater Hall.

On this walk we take you around the places central to the legendary orchestra’s Manchester history: the Midland hotel, site of the “Gentlemen’s Concerts”; the Free Trade Hall; the Bridgewater Hall and the former Knott Mill school where Barbirolli held rehearsals after the orchestra was bombed out of its home.

For his first Hallé performance of Mahler’s epic ninth symphony Barbirolli staged over fifty hours of rehearsals. When the music writer Michael Kennedy mentioned this to the Daily Telegraph chief critic Richard Capell, the latter replied, “What a prodigious waste of time.” Not so. It was that sort of effort that made the Hallé. 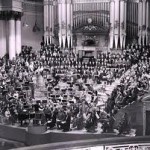