Next tour: No dates yet.
Meet: Outside the Whitworth Art Gallery, Oxford Road, time tbc.
Booking: 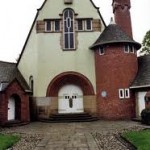