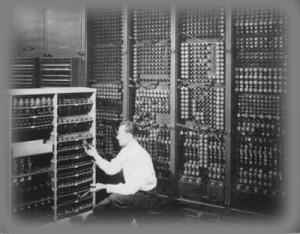 “The switch was pressed and immediately the spots on the display tube entered a mad dance. It was a moment to remember. Nothing was ever the same again.”

That was how Fred Williams described the amazing moment when he and Tom Kilburn turned on the world’s first ever computer – here in Manchester in 1948.

What a breakthrough! But it isn’t Manchester’s only scientific claim to fame. Here in 1803 John Dalton first explained how matter was made up of atoms. Here in 1917 the atom was first split, ushering in the nuclear age. Here, more recently, Andre Geim and Kostya Novoselov invented graphene – a single-atom-thick layer of carbon in its graphite form (oops, just dropped mine. Damn), which will revolutionise materials science, nanotechnology and the efficiency of conductors. It won them the 2010 Nobel Prize for Physics.

Interesting how this startling breakthrough was performed using carbon, the basic building-block of life. Certainly further life-shattering breakthroughs on a similar scale will follow in Manchester, the city of science.