On 3 April 1913 three suffragettes – Annie Briggs, Evelyn Manesta and Lillian Forrester – attacked pictures in the Manchester Art Gallery as part of the militant campaign to win the vote for women. Around a hundred years later I fear that a militant group of a different persuasion might do something similar inside the building. Not for political reasons, but for aesthetic ones, out of frustration for the sad decline of what was once one of Britain’s finest art galleries into a travesty.

Anyone who has visited the gallery on Mosley Street recently will have noticed the shock disappearance of the one thing it is meant to provide: works of art hanging on the walls. Paintings have been stored away and replaced with such nonsense as cut-up record sleeves, collages of interviews in elongated cubes, photographs and an empty room.

The local media has been full of stories of how the gallery has had to hide away many valuable artefacts, works by Pissarro and Freud for instance, for lack of space. Well, I’ve found some space ready to be filled with works of art – space in the Manchester Room, space in the exhibition room next door behind the loos and space in the former Modern Room upstairs.

The rot began earlier this year when the Modern Room, which featured David Bomberg’s Figure Composition and Francis Bacon’s Portrait of Henrietta Moraes on a Blue Couch, was turned into a photography room. No disrespect to the silver art but Bomberg and Bacon, not to mention Freud and Sickert, whose works hung nearby, must take precedence over photography. I made no comment about the closure of the Modern Room, and was prepared to ignore it in quiet annoyance until the re-opening of the Manchester Room downstairs. Expecting the latter to be stocked with local produce, much as it was before its closure last year, with paintings of Manchester scenes and contributions from Manchester artists, I shudder with horror at its new guise. 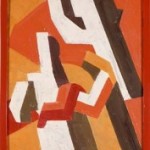 The first startling sight is the almost complete absence of works of anything remotely resembling a work of art; rather worrying in an art gallery, especially one that is short of space. On the left as one enters is Cyprien Gaillard’s The Smithsons (2005). This is a homage to Peter and Alison Smithson, the incorrigible architects who pioneered brutalism after the second world war and built some of Britain’s least-loved structures, in particular the nightmarish Robin Hood Gardens in Poplar,London. In a room to the side, the Smiths’ “Asleep”, three minutes of soporific sensuality, plays in a continuous loop alongside a film of Smithson buildings. Has the penny dropped? The Smithsons and the Smiths. It’s a pun, but a rather pointless and puerile one. The Smithsons have no connection withManchester, so why are they featured so heavily in the Manchester Room of Manchester Art Gallery? 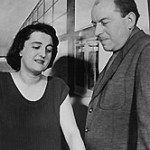 The Smithsons - not Manchester architects

In other parts of the room there are a number of long, thin cubes representing interviews with US icons such as Andy Warhol. This installation is by American Kelley Walker who has never been to Manchester, “but this exhibition shows how Manchester already inhabits him and his art”, according to the accompanying blurb. No it doesn’t. Does anyone in the gallery hierarchy really believe Manchester people are so stupid that they will accept this nonsense without complaint? It’s an insult to the memory of the philanthropists and dignitaries who once made this gallery so great.

Most disturbingly of all, space which could have been devoted to some art has been filled by the record sleeve for The Smiths’ “Panic” cut up into different shapes. How very outré, or perhaps how pointless and infantile.

So why has gallery director Maria Balshaw allowed these absurdities to be peddled? At the grand gallery opening on Thursday 28 June she was coquettishly ebullient at the prospect of working with Dave Haslam, the former Hacienda DJ and author of Manchester England, who has curated the exhibits in the Manchester Room and written the explanatory text alongside.

Haslam is one of Manchester’s most celebrated intellectuals; almost Cardusian in his reach, so it’s hard to understand why he would want to put his name to this desecration of the gallery. At the opening Haslam made a nervous, stuttery speech and Balshaw squealed in excitement. There were lots of mentions of the Hacienda and much back-slapping about the Smiths/Smithsons’ link, as if the devisors had done something clever. In fact there’s far too much of this the-world-began-and-ended-with-the-Hacienda nonsense in Manchester life twenty years after acid house and rave. It’s all rather sad and reminiscent of those bequiffed greasers with Levis turn-ups drooling in the late 1970s over memories of Eddie Cochrane stopping for a cuppa at the A1 café on the North Circular Road in the late 1950s. Yes, yes, yes, the Hacienda was a wonderful nightclub, especially the night they segued Pink Floyd’s “Flaming” into Yello’s “I Love You”, but it’s got nothing whatsoever to do with painting. Such reminiscences belong in a music museum. The art gallery deserves to be filled with art. It’s what it was created for. It’s what the public expects and wants. And no, we’re not being reactionary. What’s reactionary is the over-indulgence of everything Hacienda way in excess of its worth. The public will accept the avant-garde and experimental, but the Manchester Room is just a waste of four walls.

If Maria Balshaw is that impressed by meeting a real-life author with a serious work to his name perhaps she should come along to a New Manchester Walks event and meet an author with a dozen serious titles in his cv who was DJ-ing to the Manchester public at the cutting edge of sound when the Hacienda was still a yachting showroom. Yes, I’m seriously hoping to be invited to the curate the next display. I will suggest a revolutionary move: paintings on the walls. There are enough of them, of every school and sect, hiding away in the gallery’s storage areas.

There’s a touch of the emperor’s new clothes about the whole extravaganza, with no one apart from myself brave enough to say the art gallery is having a huge joke at our expense. No one in the city, apart from Maria Balshaw, Dave Haslam and their cronies can seriously think this is acceptable.

Indeed the gallery has enough problems without wasting its own rooms. It has loaned out major artefacts such as Ford Madox Brown’s Work without getting anything comparable in its place. It is hamstrung by extraneous political forces that it cannot obviate. For instance a deal with the Hermitage in St Petersburg was scrapped because of the British Government’s disgust with Russia’s alleged involvement in the death of spy Alexander Litvinenko.

These things it can’t do that much about. What it can affect are the things it is in control of, such as the food in the café (awful nouvel nonsense) and the inaccessibility of the stylish Italianate entrance to the Athenaeum (ridiculous). Showing the Manchesterpublic that passes by on Princess Street a permanently locked-up entrance porch is depressing. It’s a bad advert for the gallery. Keeping the old Princess Street entrance to the café permanently closed nearby is similarly unhelpful and defeating, especially for the café’s profit margins. So too is ridding the gallery of art.