A large section of central Manchester is now off-limits to the public with the arrival of the Conservative Party conference. The proscribed land is bounded by Lower Mosley Street, Great Bridgewater Street, Deansgate and Peter Street. It is being guarded by a ring of steel patrolled by armed police watching over the key sites within: the Manchester Central Exhibition Centre, where the conference nerve centre is based; the Convention Complex next door; and the Radisson and Midland hotels where most of the important delegates are staying. Only those with an official delegate’s pass to the conference will be able to enter the territory legitimately.

How ironic that this territory should be cut off from the public to protect politicians. For the same politicians owe their right to gather here to debate and discuss to the martyrdom of more than a dozen Mancunians demonstrating for the right to vote at what was then St Peter’s Fields on 16 August 1819.

The events became known as the Peterloo Massacre, and so this territory – the killing fields of Manchester – is a holy site. People died here making a stance to extend the public’s political rights, to make the voting system more just, to allow political parties to conduct debates that could change the way the country is run through popular will reflected at the ballot box by the people’s votes rather than through the whim of rich unaccountable landowners, as was the case in 1819.

Ironic really that the victims were killed by mounted troops whose actions were retrospectively supported by the then Tory government. Yet for a week every year when the party political conference comes to Manchester the public cannot enter these streets to demonstrate. It is a paradox that would have stumped Bertrand Russell himself.

But while being a holy site for some, it’s also an evil site for others. When Dave journeyed to this area in January 2008 he was keen to feature in a picture opportunity outside Salford Lads’ Club. It gave him the chance to tell the world that he, like all right-minded thinking people, was a big fan of Manchester’s greatest musical combo, the Smiths. How apt then that the conference is taking place a mile away from Salford Lads’ Club at the one location most central to the Smiths’ legend: Manchester Central, the old Central Station. 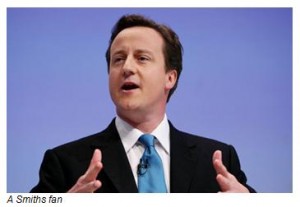 What is the Smiths’ connection to the conference centre and former station? It was here on 6 October 1965 that Ian Brady, the Moors Murderer, picked up his last victim, 17-year-old Edward Evans, while the boy was buying a carton of milk from the station vending machine. Brady had been chatting to Evans a few hours earlier at a homosexual bar in Manchester city centre. Now he asked Evans if he fancied going back with him, and his “sister”, waiting in the car outside, for a real drink. The “sister” was Myra Hindley.

Evans complied. An hour later he was being axed to death by Brady at the house he, Hindley, and the latter’s grandmother shared in Hattersley. When the execution of the killing proved more difficult than Brady expected he enlisted the help of Hindley’s brother-in-law, David Smith, who was married to her sister, Maureen. 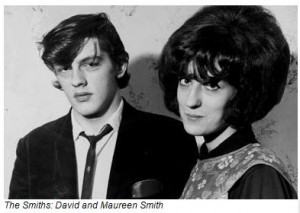 Read the account of this nightmare and its aftermath, which led to the arrest and imprisonment of the moors murderers, in Emlyn Williams extraordinary Beyond Belief, his account of the most infamous serial killings of the 20th century and the most frightening book ever written about Manchester. Throughout the book, one phrase leaps off the page: “The Smiths”. It occurs constantly, and is the reason why Morrissey, obsessed with the story of the murders from the days when he first saw himself as a potential pre-pubescent victim, to his first efforts as a songwriter with Johnny Marr, called his group The Smiths. A sort of exorcism of fear.

The links between the murders and the station get worse. A few weeks after the murder of Evans detectives searching for more evidence at the house discovered a prayer book inscribed: “To Myra, from Auntie Kath and Uncle Bert. November 16th 1958. Souvenir of your first Holy Communion”. Out fluttered a ticket for a left luggage locker at Central Station. There they found suitcases filled with sadistic paraphernalia and tape recordings of the couple torturing 10-year-old Lesley Anne Downey. Now they realised that these people were caught up in more than just a run-of-the-mill murder. They were involved in something too terrible to contemplate. (Smiths’ followers will recall that the sound of Lesley Anne Downey’s eerie voice can be heard on the group’s “Suffer Little Children”, the first song Morrissey wrote for them). 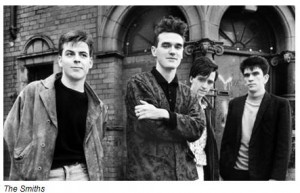 This may explain why in their early days, in 1983, the Smiths would constantly ask me and my colleagues on City Life magazine if they could be photographed inside the rotting shell of Central Station that was soon to be transformed into the G-Mex conference centre and is now Manchester Central.

So St Peter’s Fields truly are the killing fields of Manchester. Here history meets at all angles: murder, mayhem, political paranoia, democracy, devilment and drama. Someone should tell Dave before he finishes his notes for his conference speech.