If football is, as many are alleging, “coming home”, where is it coming home to? It can’t be Wembley Stadium; not the new Wembley, that concrete monstrosity which has replaced the 1966 World Cup winning stadium and Owen Williams’ beautiful twin towers, unnecessarily demolished. It can’t be any individual club ground. No, the only place I can think of that is the true home of football is the place where the Football Association, the world’s first such body in the modern era, was founded: the Freemason’s Tavern on Long Acre, Covent Garden, London (now the Connaught Rooms).

It was there in 1780 that Thomas Taylor, a vehement opponent of Isaac Newton’s scientific theories, gave a lecture on the subject of perpetual light, using supposedly “everlasting” lamps filled with phosphorous that succeeded in little more than setting light to the room. But I digress. On 28 October 1863 the Football Association was founded at the tavern by 11 clubs – Barnes, Blackheath, Blackheath Proprietary School, Crystal Palace, Crusaders, Forest (Leytonstone), Kensington School, No Names Kilburn, Perceval House (Blackheath), Surbiton and War Office.

The clubs met here a number of times over the next few months to debate ways of uniting the various codes being played around the country, with the most contentious issues being the use of hands and the physical charging of players. Representatives of Blackheath were keen on a rule that allowed a player “to run with the ball towards his adversaries’ goal if he makes a fair catch”, and another which noted that if “any player shall run with the ball towards his adversaries’ goal, any player on the opposite side should be at liberty to charge, hold, trip or hack him, or wrest the ball from him”. After losing the vote that December, the club withdrew its membership, and Association Football developed without players being able to use their hands or make full-bodied assaults on opponents (except when Sam Allardyce’s Bolton Wanderers were playing). 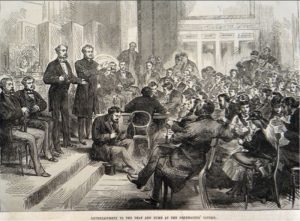