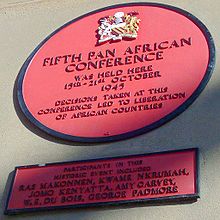 The 75th anniversary is approaching of the 5th Pan-African Congress, one of the most momentous events in Manchester, and indeed African, history. The congress, which was held from the 15th to the 21st of October 1945, saw nationalist leaders aiming for independence within that continent make their final push to break off the colonial chains of the British Empire.

Those who attended read like a roll-call of African greats. They include:

• Kwame Nkrumah, who would become the first Prime Minister and President of Ghana.
• Jomo Kenyatta, later first prime minister of Kenya.
• Hastings Banda, the eventual prime minister and also president of Malawi.
• Amy Ashwood-Garvey, widow of the legendary activist Marcus Garvey who was later deified in so many reggae records.

The Congress was held at Chorlton-on-Medlock Town Hall on Cavendish Street, All Saints, a late Georgian building now in the centre of the Manchester Metropolitan University campus of which only the façade remains. For the Congress the building was decorated with the flags of black states – Ethiopia, Liberia and Haiti – and presided over by the American civil rights activist W. E. B. Dubois, the first black American to earn a doctorate, a professor at Atlanta University, and one of the founders in 1909 of the National Association for the Advancement of Colored People.

The Congress’ timing was most apt. The Second World War, fought in the name of freedom, had just finished but there were still some 700 million people around the world living under imperial rule with no freedom or democracy. With the ending of the War came a new sense of militancy in colonial Africa, a new determination to gain what had been promised since the First World War. Some two hundred delegates came from around the world to debate racism in Britain, which was then intensifying as burgeoning immigration increased, but mostly to discuss how to end colonial rule in Africa. Pan-Africanism’s aim was to “demand the riches of the continent be used for the enlistment of its people”. It called for the “financial and economic unification of markets and a new political landscape for the continent”. Historians have long emphasised the significance of the Congress as one of the first occasions from which the views of black activists were taken seriously.

The decision to host the event in Manchester was due to the celebrated Trinidadian writer George Padmore whose “Africa and World Peace” (1937) had savaged the colonial exploitation of Africa and T. Ras Makonnen, Treasurer of the Pan-African Federation based at 58 Oxford Road. Makonnen was born George Griffiths in British Guiana and had changed his name to emphasise his support for Ethiopia, where ‘Ras’ means prince, as a centre of black pride. Makonnen owned restaurants in Manchester and was able to lodge delegates and guests to get round the colour bar that so many establishments were adopting.

It was no surprise to see Jomo Kenyatta in attendance. The Kenyan leader taught African tribal dance during the 1940s at what is now the Dancehouse Theatre on Oxford Road and could be seen walking around Chorlton-on-Medlock dressed in full African regalia swishing his cane. The Congress was successful. Within a few decades the countries represented in Manchester had won independence. Ghana was the first, in 1957; Kenya, 1963; and Malawi, 1964.

But why was the Congress held in such an unlikely venue and not say in Manchester Town Hall? A clue lies in the building adjacent to Chorlton-on-Medlock Town Hall, the Manchester School of Art. It was there in 1901 that the one white Mancunian who had done more than anyone to support the African cause, Sylvia Pankhurst, studied at the beginning of the 20th century. The daughter of Emmeline was the star pupil in 1901, winning a scholarship to the Royal College of Art, London. Sylvia was more interested in political campaigning than painting and she is famed for her involvement with the suffragette campaign to win women the vote. But after that matter was settled once and for all in 1928 when the Tory government gave women the vote on the same terms as men she took up a cause few were interested in: opposition to Italian fascism, especially after the latter’s invasion of Abyssinia (now Ethiopia).

Sylvia Pankhurst became heavily involved with the east African’s country fight for self-determination. She knew W. E. B. Dubois, the Congress’ president, Ras Mokonnen, and Jomo Kenyatta who she met at the ‘Abyssinia and Justice’ conference in September 1937. That explains the decision to hold the groundbreaking 5th Pan-African Congress in the building adjacent to the one where their tireless supporter had studied. A few years later Sylvia emigrated to Abyssinia/Ethiopia where she died on the 27th of September 1960, another imminent anniversary worth commemorating.