TOURISTS, VISITORS – BOOK OUR “7 WONDERS OF MANCHESTER” TOUR … the perfect introduction to the city

Manchester was the first city of the industrial revolution, the city that shaped the modern world. We have devised an unforgettable tour that will give you the perfect welcome to the industrial strength city.

The tour has been devised by Ed Glinert, Manchester’s most prolific tour guide and most energetic historian, author of Penguin’s Manchester Compendium and compiler of the forthcoming Manchester Encyclopaedia.

Here are the most spectacular sights, the great treasures of the city, the 7 Wonders of Manchester.

Central Library Reading Room
Modelled on St Peter’s Basilica in Rome in a library designed like the Pantheon for a temple dedicated to learning and literature. We run regular detailed tours of the library, often finishing with a close look at the Library’s treasures such as first editions of Isaac Newton’s Philosophiæ Naturalis Principia Mathematica. 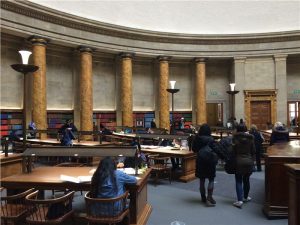 Chetham’s Library
Europe’s oldest library and the oldest library in the English-speaking world is also the oldest non-religious building in Manchester. Here Karl Marx and Friedrich Engels devised many of their ideas about how society should be reorganised at a table that still survives in the reading room near a bookcase that was once part of a bed slept in by Bonnie Prince Charlie. Regular tours take place as a two-parter with Manchester Cathedral. 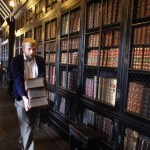 Liverpool Road, the world’s first railway station
The Liverpool-Manchester railway line opened in September 1830 as the world’s first passenger route. The Liverpool terminus has long been demolished but the Manchester station survives as part of the sprawling Museum of Science and Industry. Tours take place as part of our railways special or on the Castlefield Explorer. 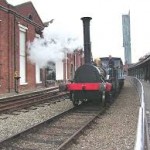 Manchester Town Hall
Manchester Town Hall is the crowning glory of the city, a Gothic Gormenghast replete with spires reaching up to God, stone statues, religious symbolism and the famous Ford Madox Brown murals. Our tour takes in everything – the architecture, the portraits, the pictures, the politics, the Order of the Garter crest, the strange animal that guards the entrance, the legend about the Nazis’ love of the building…right up to the thankfully abandoned plans to demolish it. Tour dates are announced about three weeks in advance on our website and on Facebook.
STOP PRESS. The building is currently closed for refurbishment, but that doesn’t stop us admiring the facade in all its rich glory. 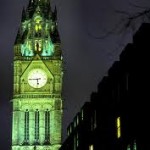 The Pre-Raphaelite Paintings at the Art Gallery
They were Britain’s greatest ever art movement, rebels, radicals, revolutionaries who emerged in 1848 to turn the art world upside down with their historically-detailed, religious paintings and dazzling portraits hewn with vivid colour and natural realism. 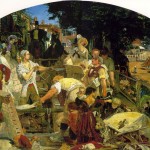 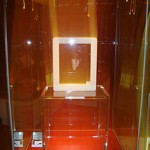 The Stations of the Cross Paintings at the Hidden Gem Church
Fourteen extraordinary expressionist paintings from 1994 by Norman Adams of Jesus’s journey to the Cross line the walls of the only Catholic church in the city centre. St Mary’s the Hidden Gem was the first Catholic church to be built in England for around 250 years when it went up in the 1790s.