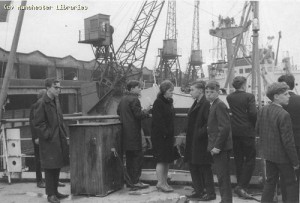 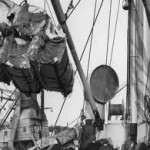 Huge docks which once harboured the world’s ocean-going liners mow frame gleaming museums of the modern age and the megalithic towers of Media City alongside a world famous canal, as deep as the Suez, as powerful as the Panama.

On one side of the water the silver shards of the Imperial War Museum North. On the other the Lowry Centre, a matchless theatre for the matchstick figure artist. And now they have been joined by Media City, northern home of the BBC. Alongside, stretches the water, filling the old Manchester Docks, cleaned and spruced for leisure and pleasure.

A new city has risen; a city of glass, steel and burnished metal, bold and brilliant. We explore the new city on the old canal, switching to and from the hi-tech world of today to the days when the Port of Manchester thrived as the 4th largest in the country.

This is perhaps the most visually splendid outdoors walk in the NMW canon. The thrill, the  high of those deep, dark docks; those vast canyons of water and the histories they hide from the days when ships laden with tea chests, barrels of whiskey, rum and sugar, packed by stevedores in the New World, pulled up in Salford to be unloaded by the men of Ordsall, to be consumed by the hungry folk of the North-West. It was a feast of heavy labour transformed into today’s heritage heavy regenerated Quays.