Next tour, the Little Ireland Explorer: Sunday 15 March during the 2020 Manchester Irish Festival.
Meet: Outside HOME, 11.30am.
Booking: Please press here to book with eventbrite. 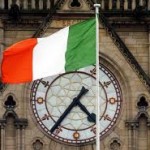 For 2020, we’re doing it a little differently, exploring Little Ireland as well as focussing on great Irishmen and women who have made their mark on Manchester.

Little Ireland was the ghetto/slum/rookery around the railway viaduct that stretched from London Road station (now Piccadilly) to Gaythorn (where the HOME now stands).

This is a little-known, seldom-heard side of Manchester history. The working-class community around St Augustine’s Catholic church was bombed in the 1940s and redeveloped out in the 1950s. Of the church, there’s nothing left, apart from the pictures, the memories and the great stories. UMIST replaced it. A new church was built in Grosvenor Square, half a mile away.

The best known story around here is Friedrich Engels’s description of Little Ireland from Condition of the Working Class, but you’ll have to come on the tour to hear that!

As for those great Irish men. There’s Brendan Behan: genius writer or terrorist? In 1939 Behan spent a night inside Bootle Street police station in 1939 after entering Britain illegally. He had been banned from the country under the Prevention of Violence Act after shooting at three policemen. But on being released, during an amnesty, came to Manchester at the invitation of the local IRA cell, thereby reneging on the deal.

In Manchester Behan was arrested by Robert Mark, then a detective constable in the Special Branch, who went on to become Commissionaire of the Metropolitan Police. In court Behan was given an extra four months on his jail sentence, despite or perhaps because of the pleas of his lawyer who kept referring to the writer as a “love choild of the Oirish revolution”.

But don’t worry, we won’t get too political. We’ll also talk about George Best, Phil Lynott, Little Ireland, Irish Town and find some time for a chorus or two of the Waxie’s Dargle.