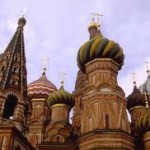 Stravinsky conducted in Manchester; Joe Sunlight built here. Yuri Gagarin posed outside the Town Hall after walking above here (in space). There’s a myth that the Communist Manifesto was researched here, but we’ll get round that. And the city council has a friendship agreement with St Petersburg.

The Russian Manchester tour begins at Victoria station because it was there that hundreds of Russian immigrants, mostly Jewish, arrived in Manchester in the 19th century fleeing persecution. That number increased significantly in 1881 when the czar was assassinated, the blame falling on the one Jewish member of the terrorist group responsible.

Any famous immigrants among that number? We’ll stop outside their well-known department store later!

Later, after the Russian Revolution of 1917, the mother country quit Britain’s side as a wartime ally and the establishment fingered a number of the Jewish settlers as the new enemy within. Many were deported back to Russia from, ironically, Victoria station.

Russian Manchester is a riddle, wrapped in a mystery, inside an enigma, as Churchill nearly said. Who knows how it might end? Perhaps the guide might be forced to send the entire group to the gulag at the conclusion of the walk. Nyet panic, товарищ, as they say in Omsk and Minsk. 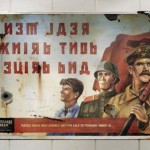 A typical scene from the last “Russian Manchester” walk