Ardwick was once so desirable a suburb the richest and most powerful men in Manchester (Nathan Mayer Rothschild, John Rylands) sought it out for their mansions.

Okay that was two hundred years ago. Things have changed since. The rich folk have gone. The mansions have been demolished (although a few smart Georgian terraces remain). The council spoiled the smart green with its pond and bandstand decades ago. The Hippodrome is now an empty lot. The ground where Manchester City played before they moved to Maine Road in the 1920s has been subsumed by a bus garage. Even the cemetery where John Dalton, Manchester’s first great scientist, was buried has been turned into a sports field, the gravestones vanished. 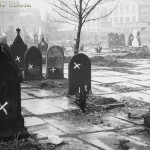 Fortunately, the most notorious vestige of Ardwick’s recent history – Coverdale Crescent, better known as Fort Ardwick – which once won an inter-galactic award for ugliest council estate, beating even the most ferocious projects on Rigal 5, has also gone, although we do have the pictures to prove it wasn’t just a nightmare. Yet evidence of Ardwick’s history remains everywhere; there is even a plaque to remind passers-by of one of the most dramatic events in Manchester history that took place under the railway bridge on Hyde Road – the 1867 rescue of the Irish Republican prisoners from a police van by a group of 30 supporters which culminated in the shooting of a policeman and the last public hangings in Manchester (see Hangman’s Manchester walk).

The most remarkable and enthralling local history hangs in the air by the derelict and disused buildings. On the road called Higher Ardwick there is a redundant conservative club. The casual passer-by might wonder why on earth there should be such a venue in run-down Ardwick. Yet this was home from home not just for the local Conservative MP (in the 1890s; nowadays only about five people in Ardwick vote Tory, and they’re all spoilt papers) but for a local Conservative MP that was the prime minister. Believe it! At the other end of Higher Ardwick is the most obscure railway station in England, which serves one train east and one train west a week. This is the weird sort of place Ardwick is!

So why are we starting the walk at the Malmaison, which ain’t exactly in Ardwick? Well there’s the small matter of Ardwick having no easily accessible landmarks where a group can meet. We could have started outside the Apollo concert hall but then we wouldn’t have been able to introduce Ardwick slowly from its boundary with Manchester (the River Medlock). So we start in town and walk a few minutes south to soak in the stories of this once grand, now gross slice of inner-city Manchester.