Engels & Marx in Manchester: Walkers of the World Unite! 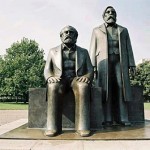 Follow in the footsteps of the men who created a political philosophy that dominated half the world during the 20th century. Hugely entertaining, informative and intriguing, the tour has been devised by Ed Glinert, author of Penguin’s The Manchester Compendium and many other tomes published by the cream of British publishers, who has been hacking away at the coal-face of local politics for 35 years, including a stint at the heart of one of the most sinister Trotskyite cells Hulme ever witnessed.

But as a piece of political propaganda its resonance has been phenomenal. Only one other book – the Bible – and that is of unsure translation – has had such an impact on humanity. The Manifesto of the Communist Party is the most influential book that ever arose from debates held by heavily-bearded German visitors in sawdusty pubs, the cornerstone of a philosophy that powered the Soviet Union, China, Mongolia, North Korea and a much of east Europe for the latter half of the 20th century, and still propels much political thought worldwide.

Engels stayed in Manchester on and off for almost 30 years. Marx came to visit him a number of times, lodging at 70 Great Ducie Street near Strangeways prison, a house since demolished. Engels had various Manchester addresses over the years. In the 1860s he lived at 6 Thorncliffe Grove, 25 Dover St, and 58 Dover Street – all in Chorlton-on-Medlock, all long demolished.

He left no easily traceable trail as he was wary of the German authorities, through the British secret service, catching up with him. Indeed on 11 March 1933, the 50th anniversary of Karl Marx’s death, the Manchester Guardian sought help in tracking down Engels’s Manchester movements. “The 50th anniversary of the death of Karl Marx is a reminder that through his great friend, collaborator and benefactor, Friedrich Engels, Marx had the closest of links with Manchester. Oddly enough neither the directories of the time nor the accessible biographies tell us where Engels lived…here is a problem for some local historian.”