Wealthy worshippers in the 18th century, unhappy with the High Church nature of the services at what is now the Cathedral, decided to build a new church in what had been Acresfield and was then being colonised as a smart new part of town.

St Ann’s opened in 1712. Here the congregation used the Book of Common Prayer and supported the Protestant line of succession – that George, elector of Hanover, was the appropriate heir to Queen Anne, simply because he was a Protestant even though he was 51st in line to the throne. In contrast, at what is now the Cathedral, worshippers preferred the immediate family of the recently deposed James II – the Stuarts or Jacobites as they became known – who to the chagrin of much of the country were Catholics. 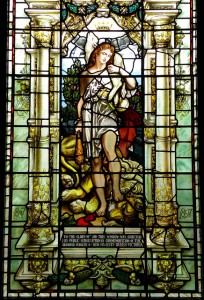 St Ann’s was consecrated in 1712 and built to the designs of John Barker, a pupil of Christopher Wren. Indeed it resembles Wren’s St Lawrence Jewry in the City of London. The church’s best feature is the stained glass windows which reveal connections with freemasonry and the Kabbalah (the body of Hebrew mysticism). More surprisingly perhaps many of these windows used to be part of the structure at long-demolished nearby churches.

After we’ve related these stories we will walk to the John Rylands Library, possibly through the mediaeval alleys, to catch an awe-inspiring first view of the great and grand Gothic palace, and then explore within in detail. Please see the John Rylands page on this website.