Next tour: Sat 11 June 2022.
Meet: outside Selfridge’s, Exchange Square, 11am.
Booking: Please press here to book with Eventbrite.
Private Tours: We took TfGM on this tour, 40 of them, a few years ago. They loved it, despite the awfulness of the events.

Morning Sat 15 June 1996. A man with an Irish accent phones the Manchester media to say that a bomb is set to go off in the city centre. Because he gives the correct code word, the authorities realise this is serious. The bomb is in a van on Corporation Street by a pillar box outside Marks & Spencer.

The police begin the onerous task of clearing thousands of people from the area. The bomb disposable unit arrives and sets up base on Back Pool Fold, off Cross Street, a hundred yards away. Will they be able to defuse the device in time? 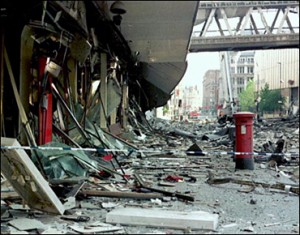 At nearly a quarter past eleven the army people sent their remotely-controlled robotic device – the pigstick disrupter – along Cross Street and Corporation Street to defuse the bomb. It arrived at 11.17am, one second too late.

The bomb exploded, sending 3,300 pounds of Semtex and ammonium nitrate fertiliser into the sky. It was the biggest ever bomb detonated on the British mainland in “peacetime” and destroyed much of the city centre.

But why Manchester? Join us on a tour tainted with trauma and tension, which reaches into the very depths of the city’s rarely told history.

One myth we will shatter is that the pillar box that stands on the site now is the same pillar box!