As Student Castle, the 358-foot new tower in Little Ireland opens, it’s worth reflecting on Manchester’s relationship with the tower block…the skyscraper…the cloudbuster. 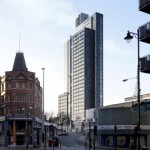 In other fields the city is a non-player. One of these is architecture. Manchester has a long way to go before it can boast of being a world beater. Most of the city’s great buildings are versions of buildings from other cities. (Yes, that includes the Town Hall, Free Trade Hall, Police Courts and Britannia Hotel). We have few original buildings and none built by any members of the Premier League of architects, let’s say Le Corbusier, Mies Van Der Rohe, Christopher Wren, Adrian Smith, Frank Lloyd Wright, Alvar Aalto, Voysey, Gaudi…

What can Manchester do to address this problem?

Manchester has to try harder than other well-known cities to attract attention. It still suffers from outsiders’ misconceptions. Okay, the outsiders are misguided, but their views, shared by so many, obstruct investment and progress.

Manchester isn’t surrounded by natural beauty like Sydney; it can’t claim elegance like Rome or London; the kind of stunning scenery seen in Edinburgh. It’s weather is drab; its cuisine unexciting. It does have a proud history and a series of achievements but these are in the past.

If Manchester is to become the city of the future, it needs an obvious icon; something to make the world sit up and take notice. The sheikhs of Abu Dhabi have poured millions into the area via Manchester City and the planned Etihad Campus, but everyday the Emiratean plutocrats must wake up and curse neighbours Dubai, home of the Burj Khalifa, the world’s tallest tower. In Abu Dhabi the tallest building is the Sky Tower by Arquitectonica at a mere 1,023ft; Dubai’s Burj Khalifa (by Adrian Smith) stands at 2,717ft. In Jeddah, Saudi Arabia, Smith is designing the KingdomTowerwhich will stand at 3,281 ft as the world’s first kilometre-high building. (A building in Arabiathat measures one kilometre. The irony is obviously lost on them, if not me. Do they not know that the kilometre is a Jewish measurement, first calculated in the 17th century by the Rev William Wilkins at St Lawrence church in London as the English version of the Biblical 2,000 cubits, the furthest a Jew is allowed to walk outside the walled city on the Sabbath?

The sheikhs of Abu Dhabi who have revolutionised Manchester this century should now leave an even more indelible mark on the city by announcing their intention to build the world’s first mile-high tower (5,280ft) – No. 1 Manchester. They can raise the money. It would make Manchester the shock city of the 21st century. And it would silence the reactionaries who moan that the Beetham Tower at 551ft is too tall. 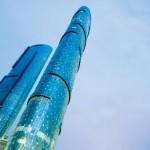 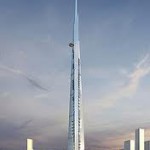 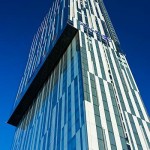