Next tour: no dates yet.

On this tour we start in Manchester and rundown a potted history of Manchester Cathedral before crossing the Irwell into the great northern city of Salford.
On the north bank of the Irwell the centre of old Salford boasts a similarly proud religious history. Standing supreme with an elegant tower is the Gothic revival Salford Cathedral – St John’s – the first Catholic church to be built in cruciform shape since the Reformation, which opened in August 1848.

Matthew Hadfield’s designs are an exercise in cherry-picking: the west front and nave are based on those of Howden Church, Yorkshire; the choir and sanctuary the Benedictine Abbey of Selby, also in Yorkshire; the spire from St Mary Magdalene, Newark and the groined roof that of St James in Liège, Belgium.

Sacred Trinity on Chapel Street is older and looks like the companion church to St Ann’s in Manchester city centre. It was built as a chapel-of-ease in 1635, and most of the current  building dates from 1752. William Webb Ellis who according to legend invented rugby by picking up the ball in 1823 was christened here. 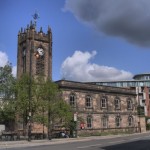 Sacred Trinity was earmarked for demolition when nearby Exchange station was planned in the 1880s but earnest campaigning saved it. Exchange has now gone, so God eventually triumphed over Mammon on this occasion. 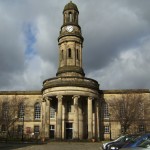 St Philip’s is a Waterloo church, in that it was constructed in 1825 at a time when the government was worried that a “godless people might become an unruly people”. The architect was Robert Smirke, best known for the main block of the British Museum.