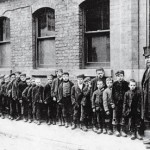 Manchester was the “Shock City” of the age, to borrow historian Asa Briggs’s much-touted term. It was a phenomenon no one had previously witnessed: what had been a small, unimportant town, cut off from the main centres of national importance, suddenly transformed into an industrial and cultural icon.

During Victoria’s reign Manchester became her second most important city; more celebrated than Birmingham, richer than Liverpool, grander than Glasgow. Yet at the outset of the era Manchester still had a feudal system of local government. The great buildings for which it became known – the Free Trade Hall, the Town Hall, the Royal Exchange in its present form – hadn’t been built. The Manchester Ship Canal hadn’t been dug.

But Manchester had become infamous as the world’s first industrial city – the first place dominated by activity taking place in a new type of work building: the factory. It had become a major centre for cotton production, machine-making and huge range of trading. It was a coming place.

With the huge growth in population there was also political and social turmoil. Thousands living together in desperate conditions meant trouble; riot, upheaval, deadly disease often followed. It was not a popular place. When General Napier, an army chief, took charge of troops in the North, he devised a barely comprehensible but shocking quote to describe the place: 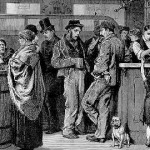 But we find time for the glories as well as the horrors. For alongside the dreadful diseases such as cholera, typhus and mill fever, there were the life-saving improvements in public health. The political turmoil surrounding Chartism and the battle to secure the right to vote can be measured alongside the advent of local democracy. Near the slums was the epic Town Hall. The town may have had a reputation as having little to offer than smoke-stack industries but this was also the home of the Great Art Treasures of 1857, the finest ever seen. We salute the philanthropists such as John Rylands and Joseph Whitworth, and heroes and heroines of the stature of Richard Cobden, Robert Owen and Elizabeth Gaskell. We remember the Lancashire Cotton Famine and laugh at the absurd rules that governed the world’s first railway. We evoke the Manchester of Benjamin Disraeli’s words: “Rightly understood, Manchester is as great a human exploit as Athens.”