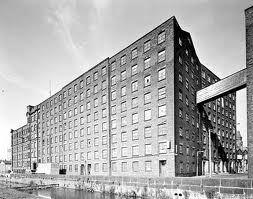 Why? Industry began in Ancoats, a factory hoot from Manchester city centre. In 1700 this was a semi-rural enclave by the river Medlock, with Ancoats Hall home to the lords of the Manchester manor. By 1800 this was a teeming, squalid suburb, blackened with soot, the smell of belching smoke hanging in the air.

The conditions were shocking: the noise of thundering machinery, suffocating air, high accident rates and notorious employment practices at the expense of an emaciated, underpaid workforce slave-driven for unsustainably long hours amidst disease, darkness, damp and desperate heat, living in dingy streets of tiny workers’ houses, jerry-built two-up two down brick boxes standing back-to-back so that as many properties as possible could be squeezed into the smallest of spaces.

As one Ancoats mill owner explained to the early 19th century poet laureate Robert Southey, when he visited Manchester in 1808, “You see these children, sir. By the time they are seven or eight years old they are bringing in the money. They come at five in the morning, they leave at six and another set relieves them for the night; the wheels never stand still.”

This was never a pleasant area, yet some of the mid 19th century buildings, such as the Ice Palace, which we will visit on the walk, were exquisitely detailed with Italianate effects, perfect for the large influx of Italian immigrants, while the earlier mill buildings by the Rochdale Canal, though functional and formal, were palaces of Mammon, monuments to mercantilism, magnificent in their might and mass.

Later experiments in social planning saw some wonderful additions to the locale: the vast Victoria Square, Manchester’s oldest surviving municipal estate, is still an astonishing site. Even more striking is the jazzy Daily Express building on Great Ancoats Street, its gorgeous curves of glass and vitrolite the perfect coating for what was then a quality mass market newspaper owned by the formidable Lord Beaverbrook.

The late 20th century saw Ancoats die. The mills shut, the workshops wound down, the canal almost dried up. Now it’s all cleaned up. The mills are modern workshops; the factories smart apartments, while new developments such as the much lauded New Islington project with its funkily named Chips Building and Dutch-styled houses are attracting investment…slowly.