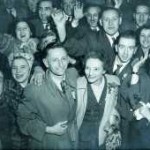 25 September 1838: the Manchester Political Union sponsored a huge political rally at Kersal Moor, Salford. The bosses closed their factories for the day. A crowd of a quarter of a million flocked to the moor. They were accompanied by 20 bands and were carrying banners, some of which had been rescued from the field at the disaster of Peterloo in 1819. The banners carried such wonderful slogans as: “More pigs, less parsons,” and “For children and wife, we war to the knife.”

Their aim was the same one that still resonates today: justice.

Nearly a hundred years later, on 1 October 1931, thousands swarmed to Salford Town Hall off Chapel Street (it’s still there, though no longer much in use) where a violent demonstration took place. It came to be known as the Battle of Bexley Square. They were protesting at the 10 % cut in unemployment benefit introduced by the new National Government.

Many were armed with placards proclaiming: “Down down down with the National Starvation Government”. At the end of the march a huge crowd gathered in the square. Amongst them was Walter Greenwood, who wrote Love On The Dole, Eddie Frow (described by Greenwood in the book as a “finely-featured young man with long hair”) and the folk singer Jimmy Miller, who later became Ewan MacColl (“Dirty Old Town”).

Police charged and arrested Frow who, according to Greenwood, was “set upon by a couple of constables savagely” and had his nose broken in the melee. Frow served five months in Strangeways Prison for assault and inciting the crowd. In his reminiscences Miller described the “crush of shouting, screaming, angry and bewildered men and women. They were pushing, pulling, trying to avoid the swinging batons of the police and the terrifying hooves of the horses.”

And to think that while this was happening the local MP was a diehard Hitler-worshipping fascist!