The Hidden Gems of Liverpool

Next tour is on Zoom: Sunday 28 March 2021.
Meet: On your computer!, 3pm.
Booking: Please press here to book with eventbrite. 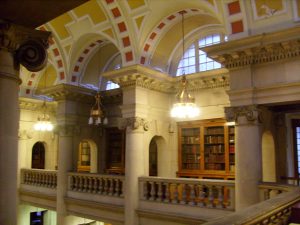 We at New Liverpool Walks (“You’ll Never Walk Alone”) will show you treasures you never thought existed in the world’s greatest maritime city.

* Prison cells where the Suffragettes were held in the building where one militant hid in an organ loft to disturb an MP’s speech.

* The secret library containing one of the most beautifully illustrated books in history, worth nearly ten million dollars on the arts market.

* The insides of the Three Graces: truly one of the world’s greatest cityscapes; but what’s within?

* A room decked out to resemble the Smoking Room on the Titanic in the city where the ship was registered.

* A tomb of one of the greatest engineers, buried above ground to stop the devil capturing his soul.

* An obscurely-sited mausoleum dedicated to the world’s first railway victim.

The Tour ends for much needed refreshment in one of Liverpool’s most intoxicating pubs…use your imagination!