Next tour: No dates yet.
Meet: Outside Didsbury Village Metrolink stop.
Booking: 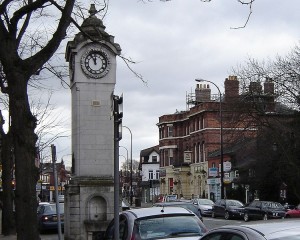 Didsbury is the most desirable suburb in Manchester, free of the legacy of grimy industry, unsympathetic town planning and the detritus of urban life.

Which is what makes a stroll around the sublimely bricked streets so sumptuous.

We start in the heart of the village and head through the sweet side streets with their sensitive stock brick constructions toward the home of Howard Spring, the celebrated author of Fame is the Spur.

Then it’s out to Wilmslow Road, not just for those mansions but for treasures like Fletcher Moss with its palm trees, the alpine garden and the ancient village green. En route, we pass the second oldest church in Manchester, St James’s, Didsbury’s Parish church, with its funerary monuments to the Mosley family who owned Manchester for 250 years.

After all the industrial trips around town, this is a most auspicious alternative. But don’t get too comfortable. You might have to go home back to Coronation Street land after this day out!

Excerpt from the walk…The Old Parsonage
The Old Parsonage is a sprawling mid-17th century cottage, one of the oldest properties in the city, standing in a sumptuous rock garden open to the public just off Wilmslow Road. It is entered through a grand archway known as the Gates of Hell that was once part of the now-demolished Spread Eagle Hotel on city centre Corporation Street. In the 18th century the Old Parsonage was home to the Rev. W. J. Kidd. His servants quit one day, claiming the property was haunted, and spread rumours that dissuaded any replacements becoming available. Investigations showed that the night time noises, mostly servants’ bells suddenly ringing in the small hours, were the work of rats using the wiring as a tightrope. 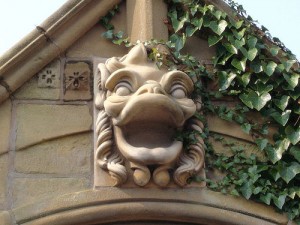 From 1865-1919 the Old Parsonage was home to Fletcher Moss, local historian, politician and prolix wordsmith who once described himself as an “astonishingly attenuated alderman and absurdly antiquated author”. Moss sat on Withington Urban District Council. He helped open libraries in south Manchester after seeking funds from the Scottish philanthropist Andrew Carnegie and left his own literary legacy in the seven-volume series Pilgrimages to Old Homes. He could be disarmingly picky with his generosity. Just before his death Moss was asked by Didsbury Cricket Club if he would like to make a donation and met the club’s representatives for an hour only to tell them: “I am now going to give you something far more valuable than money – my good wishes.”

In his will Moss bequeathed his house and its contents to the Corporation, who used it as an art gallery from 1914 until 1978. It is now an exhibition space.