THE SECOND EVER VIRTUAL TOUR OF MANCHESTER

Welcome to New Manchester Walks’ second virtual tour, which is all we can do at this time. We take you on a section of our ingenious “Undiscovered Manchester” walk, using the real-life route and a history highlight at each stop.

For the first tour we took a clockwise route around the Library. This tour heads in a different direction towards Cross Street and Corporation Street.

Go to Central Library, St Peter’s Square, for an 11.15 start

Emanuel Vincent Harris’ 1934 building was Manchester’s first purpose-built main library. Previously the city had used buildings created for other purposes, such as the Owenite Hall of Science on Tonman Street (below, behind the modern-day Air and Space Gallery in Campfield). 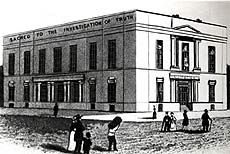 The first library had opened in this building in 1852, the guest of honour being Charles Dickens who spoke for an hour. He finished off: “In this institution, special provision has been made for the working classes, by means of a free lending library … this meeting cherishes the earnest hope that the books thus made available will prove a source of pleasure and improvement in the cottages, the garrets, and the cellars of the poorest of our people.” The library moved out of the above in 1877 as the building was falling down, and took over the Town Hall on King Street, given that a new Town Hall had opened. It stayed there until 1911 when that building fell and transferred to the unsatisfactory outbuildings of the former Manchester Infirmary. Surprisingly, since Central Library reopened in 2014, there has been no similar grand launch with a figure of similar gravitas.

From the Library, head towards Princess Street

The memorial to the Great War dead was unveiled in July 1924 by the Earl of Derby, son of the three times Victorian Tory prime minister, also the Earl of Derby. The council had invited Edwin Lutyens, designer of the similar London Cenotaph and the leading establishment architect between the wars, to create one for Manchester.

The Cenotaph has not always stood in this position. Until 2014 it stood at the other end of St Peter’s Square, by Peter Street, above the tombs of so many thousands buried under St Peter’s Church. It was moved as part of the rebuilding of the Metrolink stop.

Look at the shape of the Cenotaph. Those vertical lines soar towards heaven, except that they’re not really straight. They curve imperceptibly, so imperceptibly that it’s not noticeable to the naked eye. But if they continued skywards they would meet about 2/3 of a mile in the air. Why did Lutyens do this? Like so many architects, he was obsessed with sacred geometry, measurements mentioned in the Bible for how cities and civic buildings should be created to give them divine protection. The measurement here is not really 2/3 of a mile but the Biblical two thousand cubits, one of the most significant religious quantities.

From the Cenotaph, head north-west along Princess Street, Stop halfway along the Town Hall, opposite Tesco’s. Above is a statue of Edward III

This is the only statue on the north-east side of the Town Hall. Edward who reigned 1327-77 never came to Manchester but his influence was huge. It was he and his Belgian wife, Phillippa of Hainaut, who encouraged Flemish cloth workers to come to the North-West in the year 1363 and lend their skills with textiles to the locals. Work started on the Town Hall exactly five hundred years later, its very existence due to the power of Manchester’s cloth industry, commemorated with much symbolism inside and outside the building, and in particular on the fourth mural in the Great Hall, The Establishment of Flemish Weavers in Manchester, AD 1363, by Ford Madox Brown.

We can’t take you inside the Town Hall for another few years while work on refurbishing continues, of course, however it’s worth pointing out that on the ceiling in the main entrance hall as one enters through the main doors there is a magnificent depiction of the Order of the Garter, the foremost order of chivalry in British society. 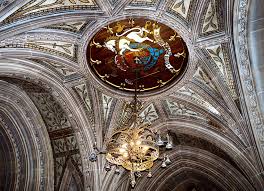 The Order is well known for its romantic motto Dieu et Mon Droit, Honi Soit Qui Mal Y Pense (“God and my right hand. Evil be to he who evil thinks”). It was founded by Edward III, possibly after an event in 1348 when, according to legend, the king was attending a ball at Eltham Palace in Kent and his dancing partner’s garter slipped. As his knights laughed, Edward waved his sword at them and thundered “… Honi Soit Qui Mal Y Pense…,” French being the language of the Court.

The king vowed to teach his knights some manners – chivalry indeed – and chose a group of them to become the first members of this new order. The Order of the Garter is closely associated with the monarchy and forms the coat of arms of the royal family. The monarch makes the appointments, small in number, their shields hang in Windsor Castle. The crest is found on important civic and national buildings; even on the masthead of The Times newspaper. Edward’s full oath concluded “Tel qui s’en rit aujourd’hui, demain s’enhorera de la porter” – “Those who laugh at this today, tomorrow will be proud to wear it.”

Turn right at Cross Street where the tram lines turn

Easy to miss on the wall of the first building on Bow Lane, just off Cross Street, is a plaque to Ernest Jones, a Victorian lawyer. Jones was a friend of Karl Marx and Friedrich Engels, and a vociferous supporter in the 1840s of the new Chartist movement that demanded a radical increase in the franchise.

When a group of Irish Republicans ambushed a prison van on Hyde Road in September 1867 and shot dead a policeman the authorities hauled in as many alleged sympathisers as they could manage. Jones represented in court two of the supposed ringleaders Edward Condon and Michael O’Brien. He immediately clashed with the court because the accused were handcuffed. “It appears to be discreditable to the administration of justice that men whom the law presumes to be innocent should be brought into Court handcuffed together like a couple of hounds,” Jones thundered. Condon was eventually acquitted; O’Brien hanged.

Jones had earlier spent two years in prison for making seditious speeches. There he wrote a poem in his own blood using a feather quill found in the exercise yard and inscribed on the blank pages of a Bible. When Jones died in 1869 more than 30,000 came out to greet the cortege.

Now look at the other side of Cross Street. High on the wall of the brown terracotta building is a plaque to one of Manchester’s greatest writers, Thomas de Quincey, born in 1785 at the long since demolished Princes’ Tavern at 86 Cross Street.

Next year, 2021, will see the bicentenary of one of the most spellbinding and hypnotic books in English literature, Thomas de Quincey’s Confessions of An English Opium-Eater, a work with such a strong Manchester connection. De Quincey (1785-1859) is still woefully overlooked and obscure. Hardly anyone reads him; probably because there isn’t that much too read. He didn’t write novels or poetry of note. He mastered at essays and recollections. Confessions is clearly autobiographical.

De Q was a terrible snob. He was born plain Thomas Quincey but added the “de” to make himself grander. He railed against the new Manchester of the early 19th century:

“I am living in a town where the sole and universal object of pursuit is precisely that which I hold most in abhorrence. In this place trade is the religion, and money is the god. Every object I see reminds me of those occupations which run counter to the bent of my nature, every sentiment I hear sounds a discord to my own. I cannot stir out of doors but I am nosed by a factory, a cotton-bag, a cotton-dealer, or something else allied to that most detestable commerce.”

Continue along Cross Street. Stop at No. 43, Phoenix House, the white Portland Stone Phoenix Building, where there is a testimonial to John Benjamin Dancer.

Dancer, 1812-87, was a pioneer of the earliest forms of photography, in particular microphotography, and helped J. P. Joule with making scientific instruments. He took the earliest known photo of Manchester, an 1842 Daguerreotype of the town from the roof of the Royal Exchange (see below). 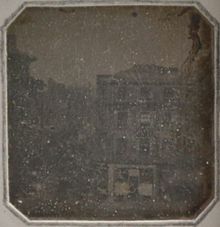 Continue along Cross Street to the corner with St Ann Street

This is one of the most glorious buildings in the city, a baroque masterpiece of 1875 by Horton and Bridgeford overflowing with coupled brackets, pilasters and pediments. It was built as the Conservative Club (that’s a brand of politics popular nationally but absent in Manchester) and for many years has been mostly empty. There is even a grand ballroom inside, somewhat spoilt by the addition of a false floor half-way up. 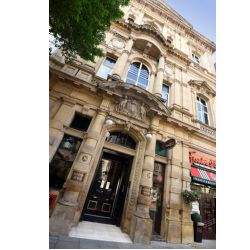 During the Second World War the building was handed to the American authorities as the American Forces Club, a recreation centre for the GIs who were here to help the Allies win the War. The GIs arriving in Manchester in 1942 brought with them such luxuries as cigarettes, cake, chocolate, oranges and silk stockings – it’s always silk stockings, have you noticed? – which no one had seen locally for years.

But there were problems, racial problems. The sight of a black sailor kissing a white English girl in a railway station sparked trouble and brought a call for the city councillors to ban all GIs from places of entertainment for a fortnight. Worse still, a US general had issued orders that: “White women should not associate with coloured men. They should not walk out, dance, or drink with them.” Complaints about the bigotry and feuding between black and white American soldiers resulted in Winston Churchill, the Prime Minister, being asked in the Commons to “make friendly representations to the American military authorities asking them to instruct their men that the colour bar is not the custom in this country.”

Cross over to the east side of Cross Street 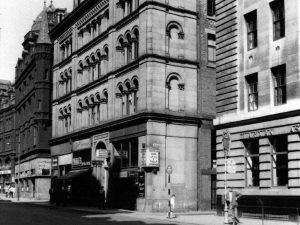 Continue along Cross Street to Boots

From 1879 to 1968 one of the world’s greatest newspapers was based here. It was the Manchester Guardian, founded in the wake of the 1819 Peterloo Massacre. The editor, Charles Prestwich (C. P.) Scott, also became owner in 1907 and stayed at the helm of the paper for 50 more years to become the greatest newspaperman of the era.

Scott would arrive by bike from his Fallowfield home, The Firs, at 6 p.m. every day with a packed meal of eggs, salt and milk, occasionally splashing out to include an apple. He would then begin planning the editorial, the long leader, which summed up the paper’s political stance, in those days radical and progressive. Scott led public opinion on a number of issues and took up unfashionable causes: Irish Home Rule, Zionism, opposition to the Boer War. Sometimes he erred. On 11 September 1908 he wrote: “We cannot understand to what practical use a flying machine that is heavier than air can be put.” Nevertheless he excelled at spotting talent and in his time hired Neville Cardus, Howard Spring, Arthur Ransome and Malcolm Muggeridge.

Following Scott’s death in 1932 ownership was wrapped up in the Scott Trust which still ensures that no one powerful magnate can emerge as sole proprietor a la Rupert Murdoch. On 24 August 1959 the paper dropped “Manchester” from its banner. Ironically sales immediately increased in Manchester, possibly because locals had previously felt the paper to be too provincial. Confusingly, the editor, Alastair Hetherington, stayed on in Manchester until 1964. In leaving the city that year the Guardian lots its original raison d’etre – to provide an alternative, independent non-metropolitan view of society – and soon became part of the metropolitan liberal establishment.

It’s one of the great Manchester legends, that the Victorian pillar box stationed right next to where the bomb went off on 15 June 1996 survived the blast and stood supreme as a symbol of Mancunian resilience. What a shame that the pillar box that stands on the site now is not the one that survived the bomb! 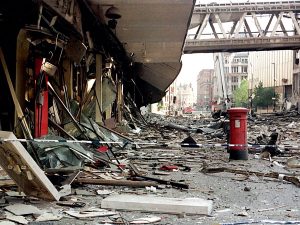 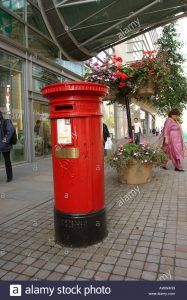