Born in a hotel on Manchester’s Cross Street in 1785, Thomas De Quincey is perhaps the greatest local-born writer in Manchester history. Well, him and Anthony Burgess.

Originally he was plain Thomas Quincey (he added the “De” to make himself sound more glam), raised by a wealthy family who lived in glorious countryside near Moss Side (really), he ended up on the streets of London’s West End as a penniless drug addict. The experiences inspired his most famous work, Confessions of An English Opium Eater, a memoir partly of his boyhood in Manchester but one laced with drug-fuelled hallucinations and passages of the most mesmerising prose.

Try this:
“The sense of space, and in the end, the sense of time, were both powerfully affected. Buildings, landscapes, etc were exhibited in proportions so vast as the bodily eye is not fitted to conceive. Space swelled, and was amplified to an extent of unutterable infinity. This, however, did not disturb me so much as the vast expansion of time; I sometimes seemed to have lived for 70 or 100 years in one night; nay, sometimes had feelings representative of a millennium passed in that time, or, however, of a duration far beyond the limits of any human experience.”

In Manchester he ran away from the Grammar School, visited the Portico Library  (which he mentions in Confessions) and mourned at family graves at St Ann’s Church. 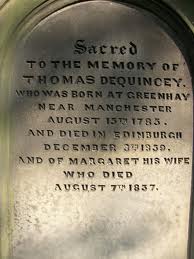