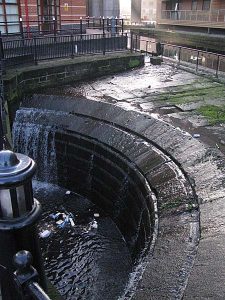 About the tour
Come with us to explore the waters, banks and history of the Bridgewater Canal, Britain’s first man-made waterway which saw Manchester launch the industrial revolution in the 1760s.

The tour begins in Manchester city centre, near the canal’s terminus, so that we can traverse in detail the delta-like tributaries that weave through Castlefield, such as Potato Wharf and the Staffordshire Basin. We can also visit the ingenious Giant’s Basin weir and watch how the canal links with the River Medlock it subjugated. From the remarkable crossroads of waterways at the Castlefield Canal Basin we head off to Hulme Locks, which allowed the Bridgewater Canal to link to the River Irwell. At Cornbrook there are traces of the original Corn Brook in a magnificent drain and at Pomona the modern lock that connects to the Manchester Ship Canal. We finish the tour with a visual surprise.

History of the Bridgewater Canal
The canal began life in 1761 thanks to its promoter, Francis Egerton, 3rd Duke of Bridgewater, who in looking for a way of reducing flooding in his Worsley mines turned to his engineer, James Brindley. They developed a way of channeling the water so that the coal could be taken out on boats. When the Duke realised he had enough coal to supply the needs of Manchester and Salford he decided to build a canal across the land so that his supply could reach those towns.

Work on the new canal began in 1758. There were no locks. Once the canal opened, it became much cheaper to transport coal to Manchester. The price of coal dropped and new industries using that coal began to flourish alongside the water. The original route, which officially opened on 17 July 1761, went from the Duke of Bridgewater’s Worsley coal mines to the River Irwell at Barton. There it crossed the waterway, now the Manchester Ship Canal, on an aqueduct that was one of the wonders of the age but has since been replaced with an equally ingenious structure. By the end of 1761 the canal had been extended to Cornbrook, and in 1765 it reached Castlefield where Brindley culverted the river Medlock.

Once a year in celebration we walk along the canal (not the entire route, that would take weeks!) to relate the great stories about the canal. And what stories! When Brindley first announced he intended taking the canal 38 feet over the river on an aqueduct held up by three sandstone arches he was greeted with incredulity. The Duke himself muttered: “I have often heard of castles in the air, but never before saw where any of them was to be erected”.

To prove how the aqueduct would work at the parliamentary hearing Brindley unwrapped a large cheese which he carved out till it resembled his planned design. He then explained that he would make the aqueduct watertight using clay-puddling – placing several layers of clay, sand and water on the floor of the waterway – demonstrating the idea in front of MPs with buckets of water and wet clay. Indeed so fond was Brindley of the system, his dying words were “puddle it, puddle it”.