Exploring the Canals of Manchester (East to Sportcity)

Manchester is a city built by the water and made by the water; and right by the city centre the waters fork as the canals head to the old industrial heartland, the disused coal mines and the state-of-the-art sports facilities of Eastlands. 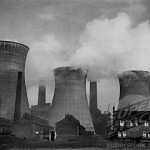 We leave the city centre and head along the Rochdale Canal or Ashton Canal until we get to SportCity, then it’s through Philips Park and back home along the other canal. It’s a long but remarkable walk through parts of Manchester where few venture and where there’s an unexpected story around every vista. After all, who would believe now that these canals  watered a prolific and lucrative coal mine, washed a major power station once bombed by the IRA (picture, left) and generally lapped the most intensely industrial zone in Britain.