Marx & Engels in Manchester: Walkers of the World Unite!

Next event is an actual walk: Sunday 20 June 2021, 11am.
Meet: Friedrich Engels statue outside HOME.
Booking: Please press here to book with Eventbrite.

We missed 28 November 2020, the 200th birthday of one of the greatest writers, best-known political activists and most formidable figures in Manchester history: Friedrich Engels. We’ll make up for it in 2021.

Yes, the creator of communism spent the best part of twenty-five years of his life working as a cotton spinner and merchant in Manchester and Salford, keeping his campaigning activities a secret to safeguard his job and so that he could rake in the postal orders and ride with the Cheshire Hunt. But away from Manchester Engels and his better-known sidekick, Karl Marx, were doing their best to create a new philosophy that would do away with the hated capitalism system of the bosses and the money men.

Join Ed Glinert, who was once a member of a Trotskyite cell in Hulme that was so secret all the members had pseudonyms, although he can’t remember what his was, on this entertaining, enthralling, wild and witty Zoom tour-talk which details Engels’s and Marx’s sojourns not just in Manchester but in London and on the continent as well. This Zoom has already been road-tested on student groups but it’s the first time we’ve presented it commercially.

Zoomers of the world unite! 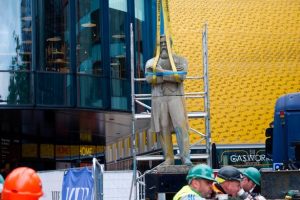