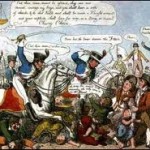 Our unique Peterloo tours have been devised by Ed Glinert, Penguin author, compiler of the forthcoming Manchester Encyclopaedia, the only tour guide who has worked with both the campaigning journalist extraordinaire Paul Foot (author of Red Shelley) and Mike Leigh, director of the new Peterloo film.

The Peterloo Massacre of 16 August 1819 is the most dramatic incident in British political history. Sabre-wielding troops charged 60,000 Mancunians at a rally called to lower the price of bread and demand the vote. More than a dozen people died and some 650 were injured.

The first few decades of the 19th century, enshrined in public imagination as the elegant age of the Regency, were a time of severe political repression in England. The Tory government, led by Lord Liverpool, feared that the kind of revolutionary activity recently witnessed in France would break out in England – probably in Manchester, where social conditions were so desperate – and chose decided to stamp out all dissent and free speech.

The government was at war with France, which saw Wellington triumph over Napoleon’s forces at Waterloo in 1815.

But as Paul Foot once wrote, the British government was also waging war against its own people.

Glinert, who has researched the story for decades, brings his unique touch to this chilling story, going into extraordinary detail, explaining the build-up to the events, the violence of the day, 16 August 1819, and the dreadful aftermath, introducing related events, themes and people: Shelley’s powerful poem, The Masque of Anarchy; the birth of the Manchester Guardian; the Cato Street Conspiracy; the Six Acts; Tom Paine and his bones – even Anthony Burgess.