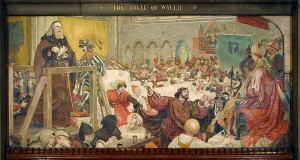 Ed Glinert, unveils his research into Ford Madox Brown’s Town Hall murals on Zoom; perfect given that the Town Hall is closed till 2024.

The curious viewer who enters the Great Hall looks at the Murals and asks: why these scenes, why this version of history? The 12 panels contain a palette full of stories but also a catalogue of twists.

It seems perverse to find a panel illustrating the baptism of a king who never came to Manchester, but not of the Peterloo Massacre. It seems strange to find a mural of an Oxford cleric tried for heresy at London’s St Paul’s but nothing about the opening of the world’s first railway station in Manchester.

And here’s another odd thing; a series of paintings decorating a room that ranks as the crowning creation of Victorian Gothic revival architecture and design contains no Victorian stories among them. How odd, how ironic, how Pre-Raphaelite.

All will be explained.

* A personal note from Ed Glinert. I had to go down to the London Library (annual subs…a lot) to extract two massive volumes on Ford Madox Brown’s paintings that I could hardly pick up, but how it was worth it! Every idea, every brush stroke, every story, every character featured, every everything, as Grant Hart sang. These books can not be found in Manchester and cost so much it’s best not to look on Amazon, even if they’re available. THAT is research.