John Dalton was the man who made modern Manchester. As the city’s first scientist, he was the first local figure to make the rest of the world sit up and take notice of Manchester through his atomic theory of 1803. He also pioneered work on colour-blindness – or what the Italians call “Daltonismo” – and cleverly discovered that it rained here a lot, keeping daily weather records for over 50 years.

On the 250th anniversary of his birth we trace his footsteps across town: his addresses in what is now Chinatown; the Portico Library where he ‘superintended’ the clock; the Friends Meeting House where he worshipped; and the obscure back alley named after him where alchemy, religion and chemistry all meet. 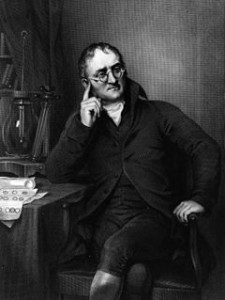