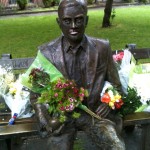 Alan Turing was a tortured genius and modern martyr who posthumously received an official government apology from Gordon Brown in 2009.