Death, decay, dead souls and devilment. That was Angel Meadow, Victorian hell-hole, cholera-infested ghetto and industrial shanty town. It’s a bit cleaned-up now but there will be plenty of horrible stories that will ensure you don’t have a good night’s sleep.

Angel Meadow. Never was a name more inappropriate. This is what made Manchester THE shock city.

Was he writing this yesterday? No, thankfully. He was writing in the 19th century when Angel Meadow was one of a number of notorious Manchester slums; probably the worst.

So this is more than a walk through an obscure part of central Manchester; it’s a trip to other worlds: Scotland and Gibraltar! Believe it. The road that connects Red Bank to the bottom of the steps leading down to the Irk from Cheetham Hill Road railway bridge is called Scotland. A hundred yards on, at the end of Millow Street, stood “Gibraltar”. This was once described by the social commentator James Phillips Kay as the haunt of the “lowest” of the population. “The stranger, if he dare venture to explore its intricacies and recesses is sure to be watched with suspicion, on every side is heard the sound of the axe or knife…”

Okay, both those revered social commentators were writing many years ago, but go there now and it’s pretty grim, which is why we guide you around these atmospheric areas, converting the squalor and sordidness into scintillating stories. And we’ve not even entered Angel Meadow proper yet. 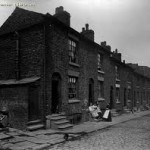 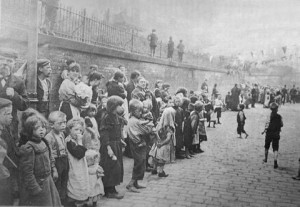