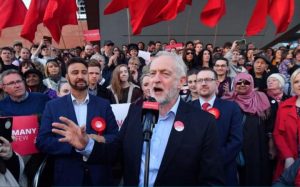 You might not have voted for him. You might think he’s a danger to the country. You might think he’s an insufferable pompous prig…but enough about Nick Clegg. This is the walk that St Jeremy Corbyn himself would take through the radical, revolutionary, red-tinged streets of Manchester in pursuit of inspiration and aspiration. A walk for the many, not the few!

This is our road to Damascus: