The Glories of Manchester Architecture, Wednesday 15 February 2023.
Meet: Outside the Midland Hotel, Peter Street, 11.30am.
Booking: Please press here to register with Eventbrite.
Price: FREE (tip the guide if he or she deserves it!).

Merchants’ palaces, Gothic towers, Baroque fantasies and Classical temples: Manchester city centre is lined with architectural splendour, from the soaring spires of Manchester Town Hall to the mathematical purity of the Friends’ Meeting House; from the exquisite Renaissance effects of the Athenaeum to the Art Deco embellishments of Sunlight House.

No wonder the Builder magazine once described Manchester as “a more interesting city to walk over than London. One can scarcely walk about Manchester without coming across frequent examples of the grand in architecture. There is nothing to equal it since the building of Venice”.

On our Manchester Architecture tours we take you through the city’s streets looking at its most impressive buildings, era by era, style by style, architect by architect, showing off Manchester’s first designer buildings from the early 19th century right through the ages to today’s stunning skyscrapers.

Want to read more?
Here’s the piece Ed Glinert wrote for the Manchester International Festival 2011 brochure. It’s one of the best articles there’s ever been about Manchester architecture, so why did the people who run the Festival refuse to use it again? 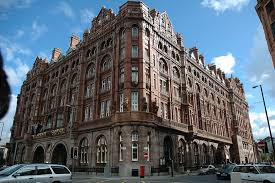 Walk from here into Manchester and the finer detailing of these facades becomes sharper. Central Manchester is dominated by 19th century architects’ desperation to re-create the traditional styles of Europe – Greek, Gothic, Italianate, Baroque – on uncharted territory. Manchester has few original buildings, just brilliant copies. The Memorial Hall on the corner of Albert Square and Southmill Street by Thomas Worthington is pure 15thcentury Venice. What’s left of the Free Trade Hall on nearby Peter Street is Edward Walters’ take on the Gran Guardia Vecchia in Verona. You want more Italy on the streets of Manchester? Head for the Athenaeum on Princess Street, now part of the art gallery, and behold a Florentine Palace that’s pure Palazzo Pandolfini by Raphael, while inside ironically is a large collection of Pre-Raphaelite paintings himself.