By day they were Victorian gentlemen with sedentary lifestyles and smart boots. By night they were rabid radicals, roaming the streets with revolutionary fervour. They were Karl Marx & Friedrich Engels. In this enthralling and exhilarating talk, Ed Glinert (who once nearly joined a Trotskyite group so secret its members were obliged to communicate using only pseudonyms) explains how two bourgeois Germans came to Manchester, created communism and changed the world. 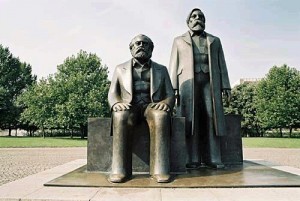