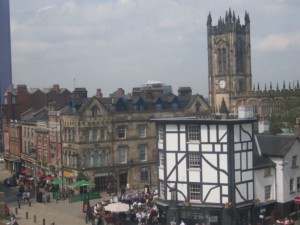 The first settled community in Manchester was based in what is now Castlefield where the Romans built the first of four forts in AD 79. After the last fort was abandoned in the 5th century Manchester grew around what is now Victoria station.

This was the heart of mediaeval Manchester, set around the parish church (now the Cathedral) and the lord of the manor’s house (now Chetham’s) – what the chronicler John Leland in 1540 called “the fairest, best builded, quickest, and most populous town of all Lancashire.”

On the Mediaeval Manchester tour we emerge from the 21st century into the unspoilt Tudor cloisters of Chetham’s, the most formidable 15th century building in the north of England, and then go in search for remnants of the old town. Even when we find them, things aren’t always what they seem. That 1530 pub by the Cathedral, it seems to have moved… 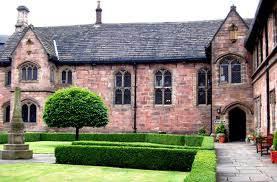