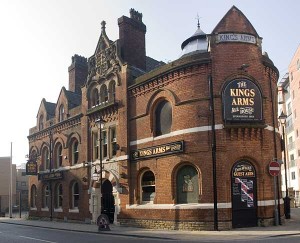 The King’s Arms on Bloom Street, in the shadow of a formidable tower straight out of Renaissance Venice, has its own theatre night. The Oxford, smart and snazzy by the old Town Hall, is so esoteric in its beers it’s been dispensing bitters named after Newcastle United greats; let’s hope the Tony Green is on. If we’re still standing, we’ll finish at The Crescent, downhome and demesne, spit-and-sawdusty, the Red Dragon when Marx and Engels drank there in the 1840s.